Monstera and Philodendrons come from the same plant family and are often confused with each other. The monstera is a tropical plant that is most commonly referred to as a Swiss cheese or window leaf plant due to its hole-filled foliage. It’s common for people to mix up the Monstera Deliciosa with the philodendron Pinnatifidum or the split-leaf philodendron. As Monsteras are often mistakenly called Monstera philodendron, many people believe them to be a philodendron.

The Swiss Cheese plant isn’t a philodendron at all but is classified as a Monstera Deliciosa. In the past, the plant has been considered a philodendron and is often referred to as monstera philodendron, a name that seems to have stuck.

The Monstera gene consists of approximately 60 varieties of flowering plants, which all belong to the arum family. These plants are native to South America and are found in the Brazilian rainforests. Let’s look at what type of plant the monstera is and whether it’s really a philodendron.

Short Answer:  No, Monstera is not a Philodendron

Table of Contents show
Is Monstera Deliciosa a Philodendron?
Similarities between Monsteras and philodendrons?
Conclusion

Is Monstera Deliciosa a Philodendron?

As mentioned above, the monstera isn’t a philodendron but is, in fact, a Monstera deliciosa. The word Monstera is Latin and means monstrous or abnormally large. The plant gets its name due to its height, as the species can grow up to 20 feet high in its native environment. When grown as a houseplant, the Monstera’s growth will be stunted, and its size will depend on the size of the container it’s grown in. Most specimens won’t get larger than nine feet in height.  So, although a Monstera is not a Philodendron, it can still make a great houseplant.

The name is also thought to refer to the plant’s unusual foliage, which is naturally fenestrated. The leaves are also very large and grow to a width of between 10 to 30 inches wide. The plant grows evergreen vines, which climb other trees and can grow to reach the rainforest canopies. Aerial roots cling onto tree branches but can also grow in the soil, helping to support and sustain the plant.

Deliciosa is a Latin word that means delicious. The monstera plant produces tasty fruit in the wild but is unlikely to bloom or fruit as a houseplant. It’s said that the fruit is similar to other tropical fruits and tastes like mango, banana, and pineapple. This plant is also the only fruit-producing decorative aroid on the planet. 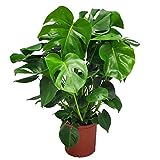 Similarities between Monsteras and philodendrons?

Both the monstera delicious and the split-leaf philodendron are hemiepiphytic, which means that they can grow from the soil or live as an air plant, attaching themselves to trees. Both species have aerial roots that attach themselves to trees and extract nutrients from the environment.

Both the Monstera Deliciosa and the split-leaf Philodendron belong to the Araceae family. They are, however, two very different species, although their leaves look similar. Many people get confused between these two plants, and in the past, it was thought that the Monstera was a philodendron. It’s now known that the plant is actually a Monstera Deliciosa, but there still seems to be ongoing confusion and a mix-up of names.