The Holly comprises a group of evergreen and deciduous plant species, all of which belong in the Ilex genus. Holly trees and shrubs often produce fruits in the form of berries, and in different colors such as pink, black, yellow, and red (with red being the most common).

You know the holiday season is fast approaching when the infamous red berries start appearing on top of these plants’ serrated or spiny leaves. Before planting one though, you may ask, ‘do birds eat holly berries?’

If you’re looking for a shrub or tree that can attract wildlife into your garden, then the Holly should be at the top of your list. Specifically, you’ll be having different kinds of birds paying you a visit, including robins, mockingbirds, warblers, waxwings, thrushes, and bluebirds when the berries are ripe and shiny red.

Birds somehow like to eat holly berries even though it’s toxic to most other animals. It’s one of their favorite snacks to get during wintertime, as the fruit warms the birds up and gives them the energy they need to migrate.

The holly also gives the birds a form of protection against predators. Most of these birds seek shelter in a holly tree or shrub while resting, as its leaves are sharp and can ward off those who are looking to get a quick bite of these birds. In the landscape, you won’t find another cold-loving plant with vibrant leaves and colorful berries as the holly.

Holly berries may be the preferred snack during the cold season, but some birds have a varied diet. They usually feed on caterpillars, spiders, other fruit, slugs, and earthworms. 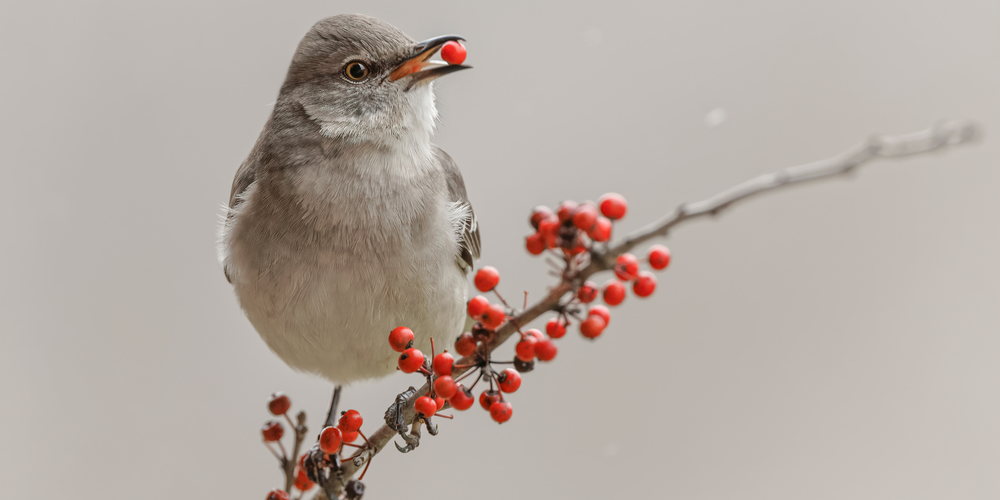 Holly berries, although attractive, are not safe for human consumption. The leaves are also considered toxic and should not be eaten by people or pets alike. Ingesting a holly berry or leaf can cause stomach and intestinal problems and lead to nausea, vomiting, and diarrhea.

But somehow, for some reason, birds aren’t affected by the shiny red holly berries. It’s believed that the fruits’ toxicity levels drop significantly after a freeze or two. After spending some time in the cold, the berries will be soft and plump, and therefore easy to eat and digest. Furthermore, the seeds can pass through a bird’s gut undisturbed and distributed to another location many miles away.

It’s worth noting that some birds usually feed on the berries in late winter and not when they go ripe in the fall season. These animals may have other food sources and think of holly as an emergency ration when choices get scarce.

What Can I Do With Holly Berries?

The holly berries you grow in your yard or garden can be used as seasonal decorations. You can snip a piece of branch that contains the characteristic spiny leaves and berries and hang them on your door, window, or inside the house. However, you should know that both the leaves and berries are toxic when ingested.

Alternatively, you can let the birds feed on your holly bush or tree in winter to help them. Uneaten berries that fall on the ground should be collected as soon as possible so your pets or children can’t get near them. Holly trees and shrubs provide a landscape attraction, especially during the colder months and when all your other plants have gone dormant.

It’s worth noting that many bird species use holly as a nesting ground. Thrushes, blackbirds, and redwings are known to eat the berries in late winter, and other animals such as hedgehogs and small mammals tend to hibernate in the thick hedge and litter beneath the plant.

That said, you don’t have to do anything after the fall season- just let nature take over and your berries will be consumed by birds who need them to survive.

To ensure your holly plant is in its best health it’s recommended that you start watering well into the fall season. Gradually reduce the watering frequency in mid-fall and allow your holly shrub or tree to harden until the first frost arrives. Keep the soil moist but not overly wet to prevent root rot, and don’t irrigate overhead so the leaves stay healthy.