Hostas in yards and gardens add volume in the form of interesting foliage, but that could also mean that when pests attack the plant will suffer aesthetically. If you’re wondering ‘what is eating hosta leaves?’ then take a look at our list and possible solutions below.

Table of Contents show
What is eating Hosta leaves?: Insects
Slugs
Snails
Black Vine Weevil
Cutworm
How to Treat Hosta Plant For Insects
Insecticides
Natural Remedies
Animals that Like to Eat Hosta Plants
What Animals are the most likely to Eat Hostas
Deer
Squirrels
Mice and Voles
How to Stop Animals from Eating Hostas

What is eating Hosta leaves?: Insects

Hostas are attractive to the following insects:

Slugs prefer to munch on hosta leaves at night and leave your plants looking ragged in the morning. They’re similar to snails in that they leave slime, but treatment for the two are markedly different.

Young hostas are some of the favorite snacks of snails. An infestation is almost guaranteed to alter your hostas’ appearance in a bad way. Aside from chewed up leaves you’ll usually see snail trails and other telltale signs.

Black vine weevils are insects that feed on the edges of hosta leaves. Furthermore, its offspring can invade the plant’s roots and crown and cause leaf wilt and yellowing.

Moth caterpillars that eat away at foliage that’s close to the ground. Warding them off is fairly easy but not so much if you have young hostas who are still in the early stages of development.

How to Treat Hosta Plant For Insects 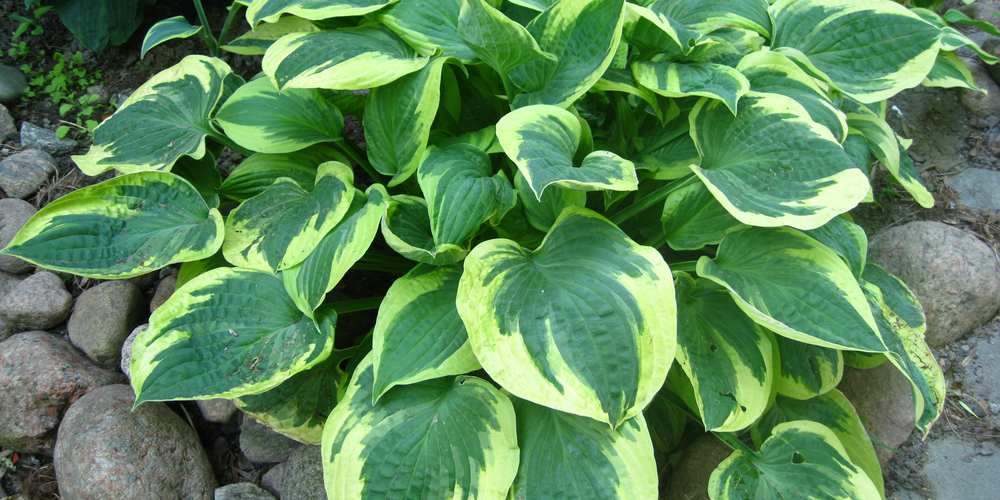 Holes in hosta leaves are usually attributed to slugs and snails. Confirm this by checking for slime trails or by flashing a light come night time. When found, you can capture them and dispose of them as needed.

Alternatively, you can use diatomaceous earth or something similar. DE makes it difficult to traverse to the juicy leaves without suffering damage, and slugs and snails will likely abort their leaf-munching mission.

You can try commercial products that deter slugs and snails, but keep in mind that you’ll probably have to buy two different products (one for snails and one for slugs).

The good news is that you can keep your Hostas relatively happy and pest-free with a few simple maintenance tips.

Snails and slugs love to hide in debris such as dead leaves, twigs and even sometimes man-made structures. You can prevent them from nesting in your garden for too long by regularly sweeping debris and disposing of it properly.

You can observe proper spacing for Hostas so they get good airflow and their leaves stay dry. It might be a good idea to put them in containers so slugs, cutworms and snails will have a harder time reaching them.

If it’s not possible then you can place a cardboard barrier around your hostas to keep away cutworms.

The list of animals that damage hostas include the following:

What Animals are the most likely to Eat Hostas

Hosta leaves are very appealing to deer and they will try to eat as much of it as they can. Unfortunately, the damage will be significant especially if they arrive in groups.

Mice and voles eat leaves and can burrow through the plant and damage its roots.

How to Stop Animals from Eating Hostas

To try and keep deer from eating your hosta leaves you can make it harder for them by installing a protective fence around your plants.

This also serves as a deterrent to rabbits and field mice. You’ll want to have the fence dig into the ground so burrowers such as voles and mice won’t be able to get through.

Voles love debris and weed, and removing them is one way to prevent the creatures from coming in. As an alternative solution you can surround your Hosta roots with pebbles so they’ll have a harder time.

It’s recommended that you employ the use of cayenne pepper to deter mice, squirrels and deer from the large and juicy foliage.

Sprinkle some of it on the ground around your Hostas, and some on the leaves.

Do this once or twice a week and after a rainshower so the animals will be in for a surprise (and hopefully remember not to come back) after getting a taste of cayenne.

1 thought on “What Is Eating Hosta Leaves: Every Possible Insect”