If you’re growing pumpkins and wondering why some aren’t ripening, it might be because they are green pumpkins. Green pumpkins can be immature versions of the orange-colored pumpkin, but some pumpkin varieties have green skin and flesh at harvest time. Green pumpkins are popular during the Halloween season. While these unripe pumpkins may look similar to their ripe counterparts, there are a few key differences to look out for.

This article will discuss which pumpkin varieties will remain green. We’ll also look at how to tell whether your pumpkins are ready for harvest and how to ripen green pumpkins.

How to tell if your pumpkins are ready for harvest

Green pumpkins will appear dark green and have a hard, waxy outer skin that does not give when touched. The stem of an unripe pumpkin should also be green, whereas a ripe pumpkin will have a more brown stem with some orange flecks. Inside the pumpkin, immature flesh will be white and more watery than a ripe pumpkin. Lastly, unripe pumpkins will generally be much smaller in size compared to their mature counterparts.

For green pumpkins to ripen, they must remain on the plant until fully developed. The pumpkin’s skin should completely harden before it is harvested; gently pinch or press the skin, and if it gives slightly, the pumpkin is not yet ripe. Leaving pumpkins on the plant longer will help them reach full maturity, allowing their natural sugars to develop and deepen their orange color.

If you pick your pumpkins too early, they will never turn fully orange as intended. To avoid this problem, check your plants regularly and only pick the fully mature pumpkins. It may take some patience, but the result will be beautiful bright orange jack-o’-lanterns that are perfect for Halloween decorations!

To store your ripe pumpkins, it is essential to keep them in a cool, dry place. Don’t leave them out in direct sunlight, as this can cause them to spoil quickly. Pumpkins should last for several months when stored properly, so you’ll have plenty of time to enjoy your Halloween creation! 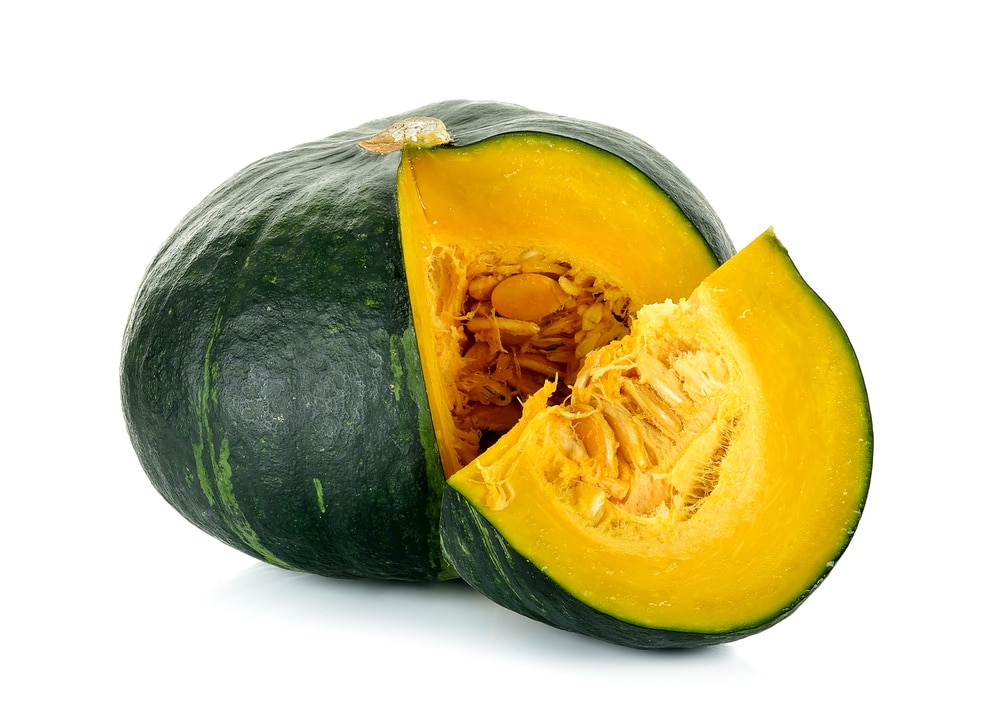 Some pumpkin varieties will remain green even when they are ripe. Heirloom pumpkins such as Trimble and Kabocha Pumpkins have green skin. Green pumpkins are often used as Halloween decorations, especially warted varieties like Crespo or Marina Di Chioggia pumpkins. These look great alongside orange pumpkins in a Halloween display.

Here are some commonly grown varieties of green pumpkins:

Triamble pumpkin is a popular heirloom variety that originated in Australia. This variety has a matt greeny grey skin and is commonly referred to as the shamrock pumpkin due to its unique three-lobed shape.

These pumpkins are easy to store and will last a long time; they have a sweet, nutty flavor and are used for cooking as well as for decorations. The triamble pumpkin is medium-sized and can weigh up to eight pounds at maturity.

Marina Di Chioggia pumpkin is another heirloom variety with textured, bubbly skin. Originated from Italy, where they are commonly eaten roasted with olive oil and salt. Although this variety is considered a medium-sized pumpkin, the fruits can grow large up to 12-15 pounds!

Shishigatani is an heirloom variety from Japan with dark green skin. The fruits have a ridged skin and an hourglass shape. It has sweet, moist flesh, making it great for roasting and baking.

Honey Bear squash is a small, round squash acorn squash with a pointed end. It has dark green, shinny skin, and an ultra-sweet flavor, making the pumpkin great for baking. The honey bear squash has won many awards, including the all American selections winner in 2009.

Winter Sweet squash is a variety of winter squash with bright yellow-green skin and sweet, orange flesh. It has a creamy texture and is perfect for making pies or soups.

Kabocha pumpkin is an Asian variety that is also known as the Japanese black pumpkin. It has a deep green skin and sweet orange flesh and can grow up to 15 pounds. It has a rich, creamy texture that makes it great for baking many fall recipes and making soups.

No matter which type of pumpkin you choose, it is essential to remember that green pumpkins must be left on the vine until fully mature for them to ripen.

These tips will help you identify green varieties of pumpkins and distinguish them from unripened fruits. Harvesting your crop at the correct time will help ensure that all the pumpkins in your garden will be ripe and ready for carving and for fall recipes come October.