In the language of flowers, zinnias represent thoughts of absent friends, while dahlias symbolize dignity and elegance. Both with brightly colored petals blooming profusely in the summertime, for the untrained eye, dahlias and zinnias may appear quite similar. However, as you take a closer look, there are several key differences between dahlia vs zinnia.

Before diving into the similarities and differences between dahlias and zinnias, it’s helpful to understand a little bit more about each plant.

Dahlias are tuberous, herbaceous, tender perennials that are native to Mexico. It is a tender perennial, meaning that it will come back year after year in frost-free climates, but in colder areas, the tubers must be dug up and stored indoors over winter.

Dahlias grow anywhere from 15 to 72 inches tall, depending on the variety, and they bloom from midsummer until the first frost.

The dahlia flower itself is a compound flower, meaning that each bloom comprises smaller flowers or florets. First, the outermost layer of florets is the ray florets, the long, thin petals that give the dahlia its characteristic daisy-like appearance.

Next are the inner florets. They are tubular and usually lack petals. Additionally, the flowers can range in color from white, red, yellow, and even orange.

They are mainly grown as ornamental plants, but the tubers are eaten in some parts of Mexico. Dahlias are also used as a source of raw material for the production of goods like paper and textiles.

Zinnias, on the other hand, are annuals, meaning that they only live for one growing season. They are native to Mexico and Central America, but they have naturalized in many other parts of the world. Zinnias grow anywhere from 6 to 48 inches tall, and they bloom from spring until fall.

Like dahlias, the zinnia flower is also a compound flower, made up of many smaller florets. However, unlike dahlias, all of the florets are ray florets, meaning that they all have petals. The flowers come in many different colors, but they are most commonly seen in shades of white, pink, purple, red, and orange.

Zinnias are primarily grown for their landscaping and ornamental value. 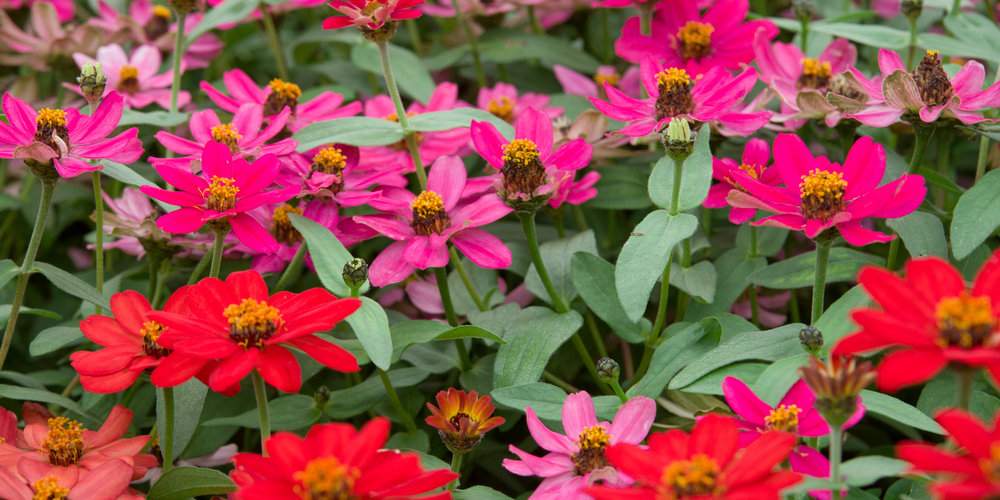 Now that we’ve gone over some of the basic features and characteristics of dahlias and zinnias, let’s take a closer look at how to tell these two flowers apart.

One of the main and key differences between these two flowers is that dahlias are tender perennials, while zinnias are annuals. As mentioned earlier, you can expect to see dahlias yearly after the first year of planting if you live in a frost-free climate. Zinnias, on the other hand, will only last for one growing season.

Another way to tell dahlias and zinnias apart is by looking at the type of petals each flower has. Dahlias have both ray florets (petals that look like those of a daisy) and inner tubular florets, while zinnias only have ray florets. In a way, this gives zinnias a more uniform look, while dahlias have a bit more variety in their appearance.

Dahlias are also smaller than zinnias, with most varieties growing to be no more than 15 inches tall. Zinnias, on the other hand, can grow to be up to 72 inches tall. If size is a deciding factor for you, check the main differences in the plant size and choose one which works best for your particular needs.

Despite their similarities, both flowers have a lot to offer in terms of their appearance and personality. It’s really up to you to decide which one you like best!