Have you noticed a bug that looks like tree bark in your garden? You are not alone. The brown “stink bug” is an invasive species that earned its name because of the odor it releases when crushed or disturbed.

Native to Eastern Asia, it came to the US only in 1996, but by the end of 2004, it quickly spread in 4 states. Today, it is present in 44 states. Stink bugs like to lay their eggs inside the bark of trees during the summer and attack forests but don’t mind feeding on homegrown trees and indoor plants. To learn more about this insect, keep reading the essential guide we put together for you.

Table of Contents show
Characteristics
How To Know You Are Infested
Control and Prevention
Bug that looks like Tree Bark: The Bottom Line 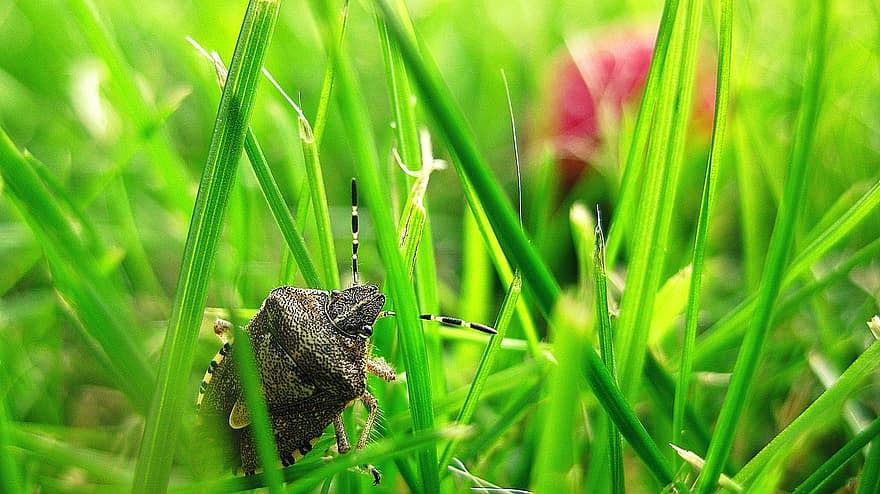 Stink bugs can go from brown to mottled grey and are roughly pebbled, but adults may look bright green. They feature long heads with antennae in front of their eyes and have wings for flying. They are usually no longer than one inch long and have an oval shape.

Only adults are good fliers. Nymphs (immature insects) come out from their eggs with red eyes. To grow, they molt and shed their skin five times before reaching their adult size. In general, adults lay about 300 eggs which hatch in about a week and come to mature size in less than five weeks.

How To Know You Are Infested

Stink bugs don’t move much. It is common for homeowners to tind these insects inside as soon as the temperatures drop after the winter. While a couple of bugs shouldn’t concern you, a large number of dead and alive stink bugs might signal a severe infestation, which you should manage promptly.

These insects can even cause damage to crops and plants as they like to feed on flowers, fruits, seeds, and leaves. If the population that attacks you is large, you may notice wilted brown leaves with discoloration.

While they can control some harmful caterpillars, you may want to eliminate them as soon as possible. You can contact a professional bug control service to assess the damage and identify the access points for taking care of this bug.

While it is not easy to control them, you can prevent stink bugs from attacking your house by ensuring you seal any cracks around windows and doors. You may want to rub them with aromatic dryer sheets to repel them.

Common entry points for these insects include doors, electrical outlets, skylights, and chimneys. Plus, these bugs like lighting. You can change your exterior lanterns to make them less attractive to stink bugs by choosing yellow bulbs or sodium vapor ones. Also, ensure you pull shades or blinds closed at night.

Since these bugs are invasive species, they don’t have natural predators that feed on them, causing them to spread quickly throughout the country. While they can damage crops and ornamental plants, they are not considered a threat. These insects do not bite or sting.

To prevent them from attacking your garden, keep it clean and remove debris. Indeed, these bugs use weeds or overgrowth for protection and like to hide in old boards, logs, and lingering wood.

During the winter, stink bugs hide in walls, attics, and crawl spaces. Make sure you seal all the possible entry points. Unfortunately, these insects resist most pesticides. An organic method of stink bug control is spraying them with kaolin clay, which prevents them from laying eggs and feeding on plants, causing them to find another shelter.

Bug that looks like Tree Bark: The Bottom Line

Hopefully, you now know more about this insect. The stink bug is an invasive species of bug that looks like bark. While it won’t threaten your garden or house, dealing with this type of insect can be a nuisance most homeowners will gladly skip. This invasive species is not easy to control.

However, you can take some measures to prevent it from choosing your garden and your house as its shelter. Remember to put the tips we included in this essential guide into practice, and do not worry if you notice a couple of bugs. However, if you believe these bugs are causing damage to your plants and crops, you may want to call a professional pest control service to take care of the problem.

Related Article: 7 Bugs that Kill Trees and How to Eliminate Them