Trees can serve as ornamental decorations in gardens and yards, and their long branches and leaves can function as shades to protect you from the hot scorching sun. Most can produce flowers or seed pods that act as an aesthetic bonus. So if you’re in the market to grow them, here are 9 trees with seed pods you can try. 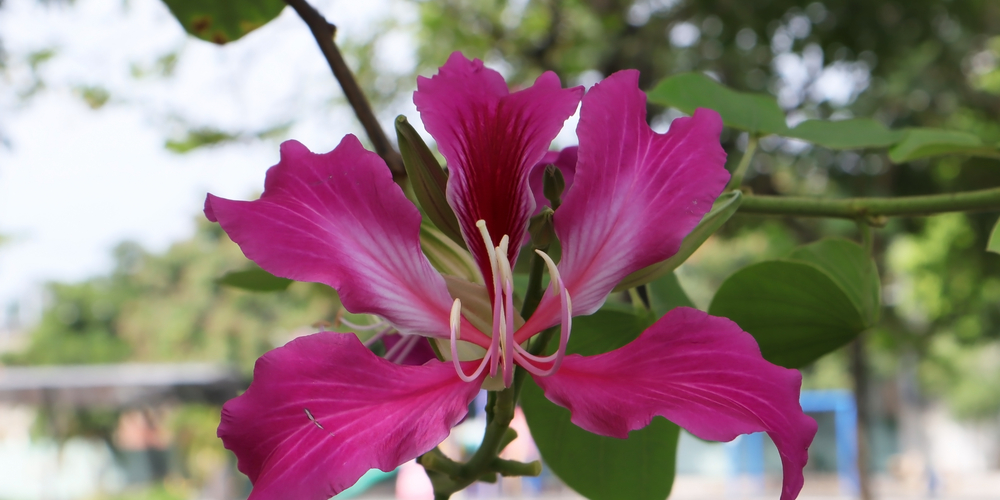 Starting off the list is the Purple Orchid Tree (bauhinia purpurea), a pod-bearing tree that produces exceptional flowers.

Often called ‘Butterfly Tree’, it stands out among gardeners and landscape enthusiasts due to its one-of-a-kind flowers that span anywhere between 3 to 5 inches. These flowers assume the shape of butterflies, with veined petals and streaks of white among pink and red. As an added bonus, it has a very compelling fragrance that’s sure to fill your home with its sweet scent.

Even as is, the tree has cute little heart-shaped leaves that catch the eye of any visitor or passer-by. You’ll definitely love the show of colors come mid fall.

The Tamarind is a slow-growing tree that has a very long life. The evergreen variety can be mostly seen in tropical and subtropical climates, and can be used in both landscaping and cooking purposes.

The Tamarind produces tan pods that are actually fruit, which is used in culinary dishes throughout the world. If you want to give your garden or outdoor lush green, look no further- the tree assumes a vase shape and thick canopy that’s largely made up of dual leaves.

Eastern Redbud (cercis canadensis) is a relatively easygoing tree that thrives in areas where there’s full sun or partial shade. It grows in well-draining soil and is relatively free of problems that plague other tree varieties.

What separates the Eastern Redbud from other seed pod-bearing trees is that it’s small (only up to 20 feet in height), offers color-changing leaves (starts out red and turns green as they mature) and turn from dark green to yellowish in summer and autumn, respectively.

Its flowers resemble cherry blossoms in small, pea-like sizes and sporting several shades such as rose pink to nearly purple. 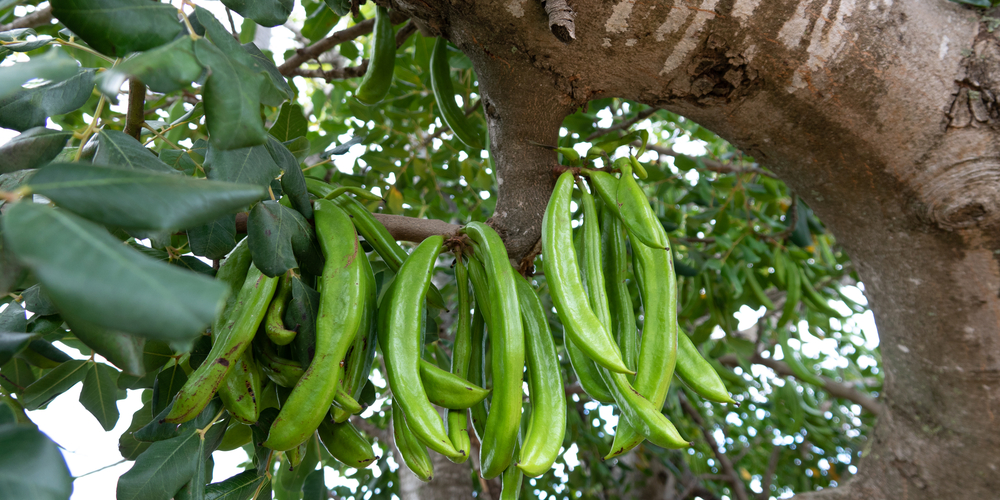 Trees with edible seed pods are rare, but if you’re looking for one then you should consider the Carob tree.

The evergreen shrub can grow into a full-fledged tree and produce pods that are rich in vitamin B and A, as well as sucrose and protein. The sweet and nutritious fruit can be a snack or a treat and grows quite constantly as long as the tree’s needs are met.

Home gardeners will certainly find the Carob tree to be not fussy at all. All it needs is bright morning light and a well-draining soil, and protection against excessive moisture and the cold. 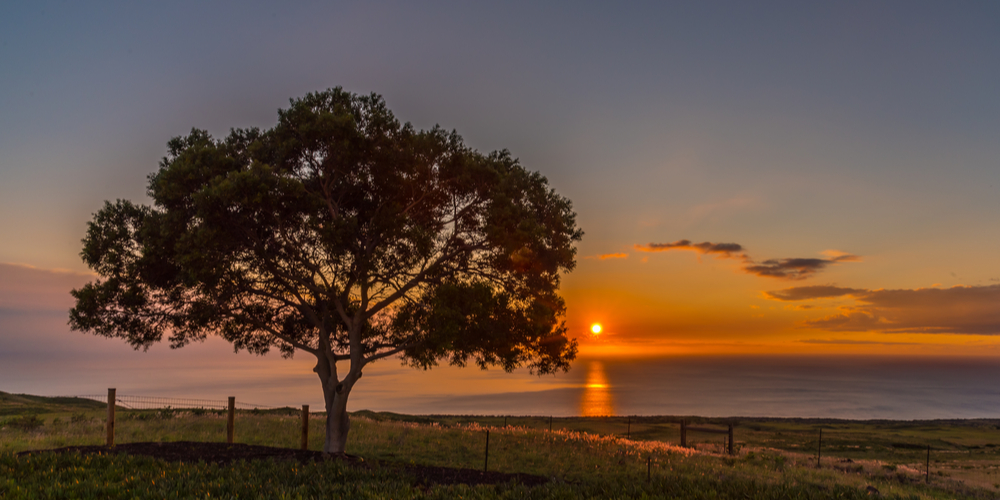 The Koa Tree, or otherwise known as Acacia koa is native to Hawaii and largely considered to be the largest native tree there. That said, you’ll want to allocate a massive amount of space if ever you want to take care of this gorgeous species.

The tree grows to a sprawling state- about 30 feet maximum and has a lifespan of somewhere between 5 to 20 years. The shade these trees produce is amazing, and they aren’t that difficult to care for as well.

Wood from the Koa tree is often used to create crafts and furniture. It can survive direct sunlight and can tolerate fairly long drought periods. A well-established Acacia koa can live without watering and get its sustenance from regular rainfalls. 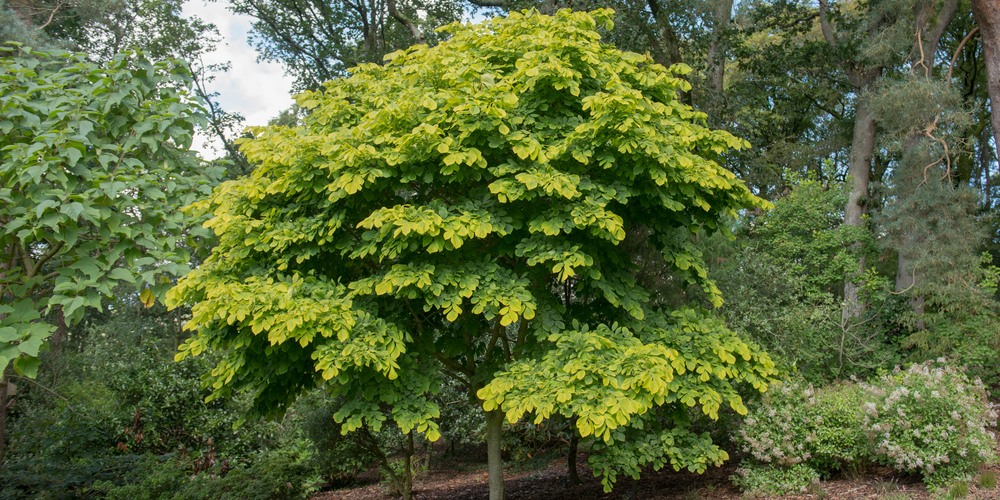 Native to Kentucky and can be seen in other states such as Oklahoma, Alabama and Illinois, the Yellowwood is a landscape delight due to its low-branching state and trailing white flowers.

Cladrastis kentukea gets its name ‘Yellowwood’ because of the color of its innermost wood. What’s worthy to note is that the branches are fairly brittle, and that its root bark was used by early settlers as a dye.

Yellowwood has a seed pod that’s a fruit which ripens during the fall season. The leaves are golden yellow and grouped together in a downward turn. During mid-May, Yellowwood produces fragrant white flowers that are about an inch long and bunch together, trailing downwards. 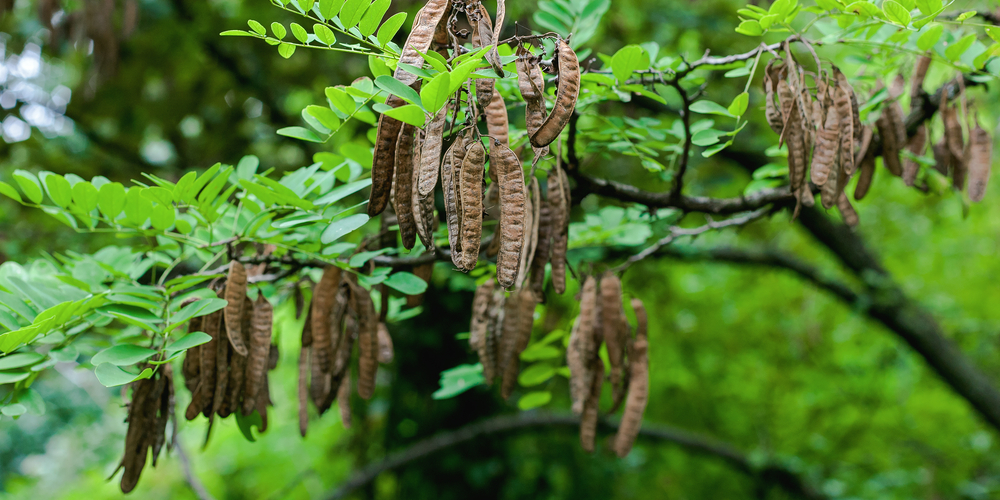 Often underappreciated and mistakenly feared, the Black Locust Tree is one of the fastest-growing trees with seed pods.

The reason why it’s named as such is because it spreads quickly and has a fair amount of thorns. Some experts label it as an invasive species, but then it sports numerous benefits as long as you take care of it properly.

Black Locusts can serve as a sturdy protective shield from the elements, and its leaves are similar to alfalfa in terms of nutritive value. Furthermore, its flowers attract honeybees and are actually beneficial for them.

The Blue Palo Verde has that brilliant shower of yellow flowers and bark that seemingly shifts between green and blue. When taking home one, you should do extensive pruning on the lower growth to establish a ‘walk under’ characteristic.

Taking care of a Blue Palo Verde is relatively easy- just put it in an area where there’s plenty of bright sunlight and make sure that you don’t overwater it. You’ll be rewarded with bright yellow blooms that take over the regular foliage come mid-spring. The tree offers a decent amount of shade and looks great on any outdoor landscape.

The Western Redbud Tree (cercis occidentalis) is small but it can outshine any tree with its innumerable blooms.

What’s noteworthy is that you get treated to not just one, but four different displays per season. Come springtime, magenta-colored flowers are everywhere and contrast with the silver sheen of the branches. During summer, the blooms turn into purple-brown seed pods, and the leaves follow the rustic colors of fall. Finally, in winter the leaves fall and reveal the stately gray-silver branches.

It’s compact and can fit most gardens or outdoor landscapes as well. Every budding tree enthusiast should definitely try one.