Though it is often overshadowed by more popular fruits, rhubarb is a unique and delicious ingredient that deserves a place in the kitchen (and probably in your garden). It has been used in pies and other desserts for centuries, and its tart flavor pairs well with sweet or savory dishes.

Its large and dark-green leaves, paired with its thick and fleshy stalk, make it easy to identify.

Unfortunately, many other plants and even weeds fit this description and are often mistaken for rhubarb.

To help you identify rhubarb and avoid these imposters, we’ve compiled a list of some of the most common plants that are often confused with rhubarb.

Table of Contents show
Weeds That Look Like Rhubarb and How to Identify Them
Burdock or Wild Rhubarb
Skunk Cabbage
Poison Hemlock
Prickly Rhubarb
Weed that Looks Like Rhubarb: Final Thoughts

Weeds That Look Like Rhubarb and How to Identify Them

Rhubarb is an edible plant, that’s often grown across America. There are also many weeds that look like rhubarb but are not. Some of them are poisonous, and others can cause skin irritation.

Before you go out into your garden and start picking (or pulling) what you think is rhubarb, take a look at this list to make sure it is indeed the edible plant. 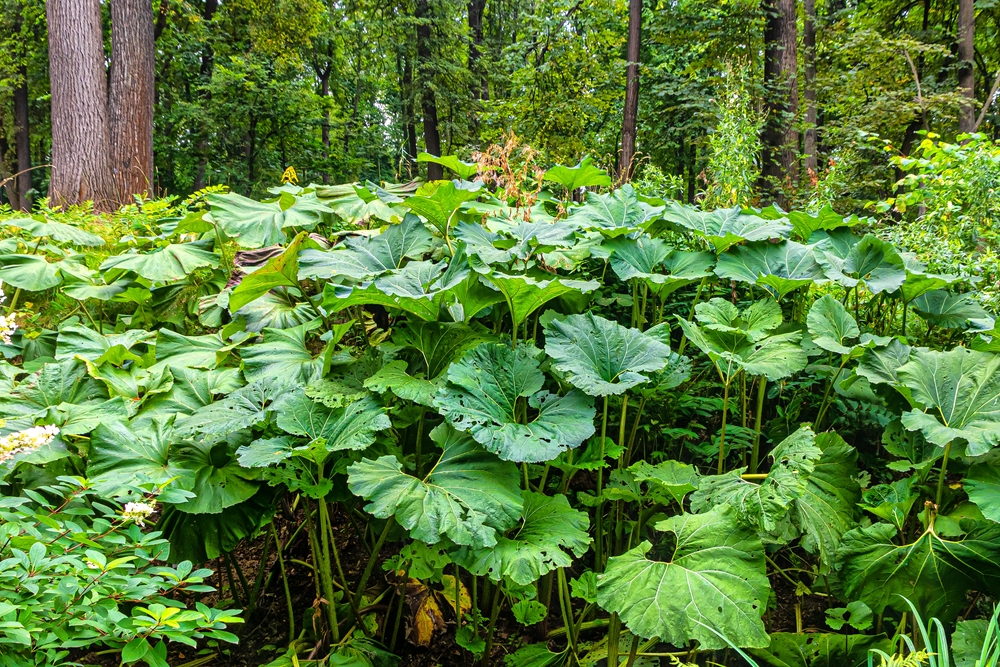 Aside from its misleading common name, burdock (Arctium minus) is often confused with rhubarb because of its large leaves and fleshy stalk. Unlike the actual rhubarb, burdock has prickly leaves and small, red or white flowers. If you see any of these flowers, you can be sure it’s not rhubarb.

Other distinguishing features of burdock include:

Additionally, the wild rhubarb has a taproot (a thick, fleshy root that grows straight down) instead of the fibrous roots of the rhubarb plant.

So, if you see a plant with large leaves and a thick stalk, check for prickly leaves and flowers before you add it to your recipe.

Additionally, you may also want to closely inspect its stems. Unlike rhubarb with smooth and red stems, skunk cabbage’s stems don’t share the reddish coloration.

If you want to feel more certain, you can also try to smell the plant. Break down its stalk and leaves, and if it smells like skunk, then it is indeed skunk cabbage. Rhubarb is supposed to smell sweet, fresh, and fruity.

Poison hemlock (Conium maculatum) is a highly poisonous weed that looks eerily similar to rhubarb. It has large, dark-green leaves and a thick stalk, and its small white flowers bloom in clusters.

However, some key differences can help you distinguish between poison hemlock and rhubarb.

The leaves of poison hemlock are fern-like, while the leaves of rhubarb are more like maple leaves. If you see any plants with these characteristics in your garden, do not try to eat them. 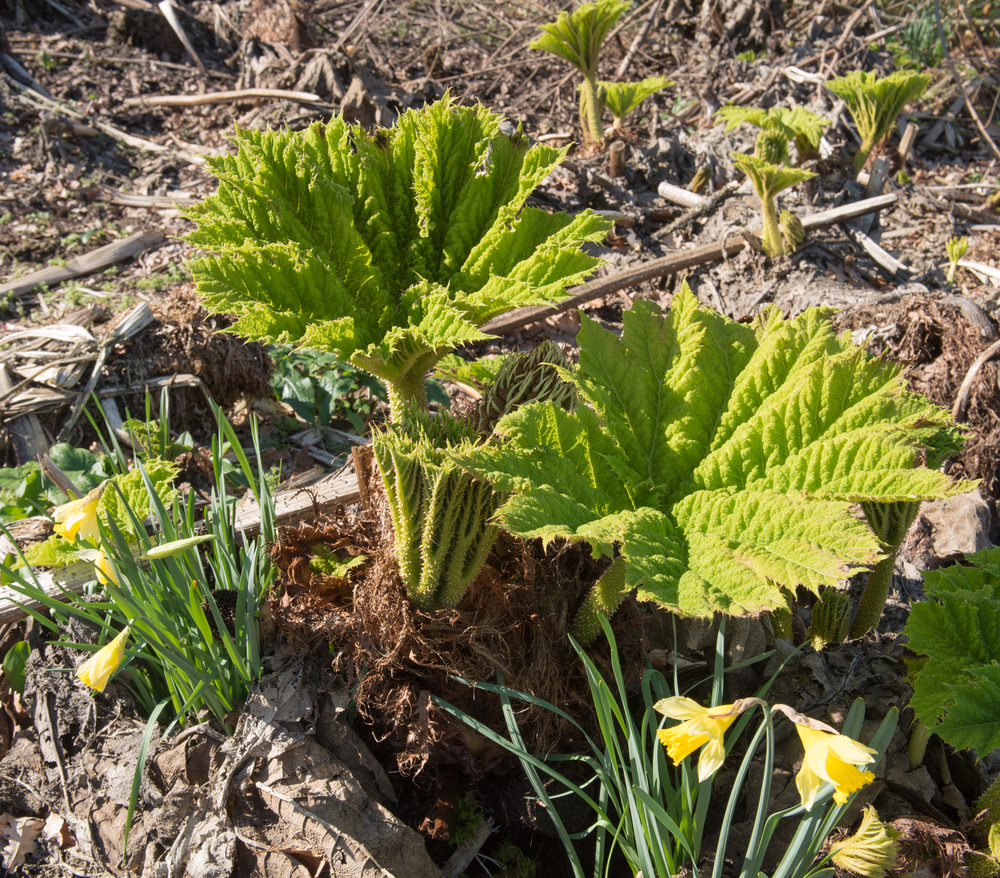 The stalks give away the fact that this plant is not rhubarb.

Prickly rhubarb (Rheum palmatum) is a weed that looks similar to rhubarb but has spines on its leaves and stem. Its stems are relatively shorter than those of rhubarb, and its leaves are more deeply lobed. Additionally, you may also notice that this particular weed has purple dots on its stems. Rhubarbs usually don’t have these.

So, if you’re ever unsure about whether or not a plant is a rhubarb, take a look at this list for some key distinguishing features. While most of these plants are harmless, some of them (like poison hemlock) can be deadly if ingested. Being able to immediately identify which are weeds and which are rhubarb can save you a lot of trouble (and possibly even your life).