It’s a smart move to grow tomatoes in a raised bed. Raised beds help plants get up from the ground and control the nutrients, soil, and water that they get. Most gardeners miss how to get the interval dimension from one tomato to the next one.

In general, a traditional tomato garden has its tomatoes 2 feet afar. However, since a raised garden bed is compact, the tomatoes will need to be at least 1sq foot afar. Therefore, a four-by-four bed should have four or at most five tomatoes, but you can provide more space depending on the number you target to grow.

That’s not all. Tomato spacing heavily relies on the type-determinate or indeterminate. The spacing for the two thus varies accordingly. As you read on, you will understand why tomato spacing is important and the measurements needed for each type.

What types of tomatoes are grown from raised beds?

There are two types of tomatoes, the determinate and the indeterminate. Knowing each type can help you determine the right spacing when raising them from the garden bed. Each has its unique characteristics, such as;

Determinate tomatoes are what you commonly call bush tomatoes. They are compact and grow to about three feet. Still, other varieties may reach four or even more feet upon maturity.

Since the determinates tomatoes get ripe at one go, they are preferably best for gardeners who want to preserve their produce. Determinate tomatoes can do without support. Nonetheless, they still can be supported using straight tomato cages.

Indeterminate tomatoes are different such that they can grow anywhere between 6 to 8 feet tall. Besides, they only cease to grow when killed by the end of the frost season. You might know them as vining tomatoes and produce their harvest slowly. Indeterminate tomatoes need strong supports like trellises or tall cages.

Tomato Spacing in a Raised Bed

In general, spacing depends on the type of tomatoes to be planted, the supports used, and the number in one bed. Trellised tomatoes in cages can grow closely, unlike those with no support.

If you grow dwarf tomatoes that reach anywhere between 12 to 18 inches in height, one foot afar will suffice. On the other hand, determinate tomato plants that reach up to four feet should be grown two feet apart.

Supporting your tomatoes creates a huge difference in space usage. Indeterminate tomatoes can be grown with spaces falling anywhere between 18 and 24 inches. The spacing should allow pruning activities without damaging the plants. If you intend to leave indeterminate tomatoes unsupported, spacing them three to four feet apart will be best.

What’s the appropriate distance for tomato spacing in a raised bed?

Generally, if you use a raised bed, you have to leave 3.5 to 4 feet between rows. Doing so allows proper flow of air and even offers space to work so you can work on the tomatoes.

What are the benefits of correct tomato spacing in a raised bed? 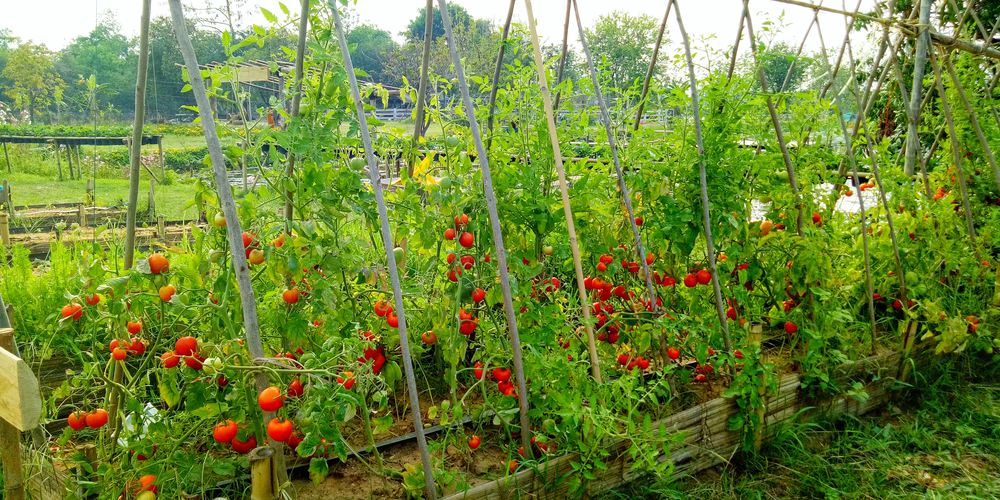 There are always negative shots when tomatoes are stuck against each other in limited space. They have to fight for food, and there is less air circulation. Spacing will help in ways such as;

When spaced too closely, tomatoes become vulnerable to diseases. And the risk of limited air not only elevates the risk but also ensures that the diseases are rapidly spread.

Tomatoes love the heat. It’s the reason behind healthy growth. Besides, sunlight is necessary not to be forgone when it comes to fruit formation. If the seedling is crowded, your tomatoes will provide an unwanted shade over their neighbor and affect your tomatoes’ health in the long run.

Spacing tomatoes correctly increases produce as they grow without competing for nutrients and water. But you need not exaggerate the spacing as it will allow a margin for weed growth.

Before calculating how you will use your raised bed to grow tomatoes, it’s best to start by determining the number of stalks you will sow. Then, it all comes down to the type of tomato to be grown and if you are going to reinforce them with support or not. If you are still stuck, the above notes can be useful.