Stars are one of the most iconic shapes known to man. It is also one of the least common naturally occurring shapes in nature. So when you see a star-shaped flower blooming in your garden, it’s something special!

There are many different types of star-shaped flowers, each with unique characteristics. Here are a few of the most popular star shaped flowers: 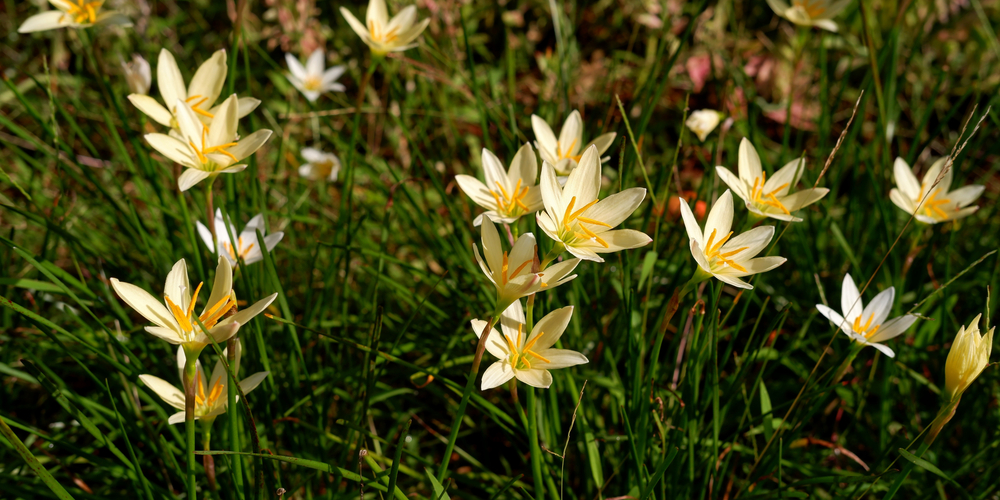 Our list of star shaped flowers starts with the zephyr lily. The Zephyr lily is a gorgeous six-petaled white flower native to the Western Hemisphere. It grows in temperature and tropical regions and is named for the Greek god of the wind.

The blazing star is a star-shaped flower that blooms in the summer and fall. It is native to the United States and typically grows in the eastern and central states.

The blazing star has a gorgeous bright purple flower that immediately draws your eye. One of the most significant advantages of planting blazing stars is that they are perennials. You only have to plat them once to enjoy their blossoms yearly.

The penta blooms in the summer. It is native to the tropical regions of Africa, the island of Madagascar, and the Arabian Peninsula. This five-petaled flower comes in various delightful colors, including red, pink, bright purple, and white.

One of the advantages of pentas is that they do not require a lot of care. This hardy flower can withstand full sunlight and dry conditions.

As the name suggests, the spring starflower is a six-petaled flower that blooms in the spring. This beautiful flower is related to the onion, but I promise it smells much better. Each flower gives off a scent of honey, and it will add a wonderful olfactory experience to your garden.

This flower is native to Argentina and Uruguay but is robust enough to be cultivated in most environments. Many people throughout North America, Australia, New Zealand, and Europe grow this flower in their gardens.

The dahlia is a star-shaped flower that blooms in the summer and fall. It is native to Mexico and typically grows in warm climates. There are over 42 species of dahlia, plus many hybrids.

Dahlias come in various colors, including yellow, orange, pink, red, and purple. The colors often approach a neon hue and are incredibly striking. One of the advantages of dahlias is that they are relatively easy to take care of. They do best in full sunlight and need to be watered regularly.

It comes in various colors, including white, yellow, and pink. It is also a perennial that will bloom year after year. The chincherinchee is a great star-shaped flower for both gardens and vases.

Also known as the golden star, the pretty face flower is native to California and Oregon, growing among the coastal tree groves. It blooms in the summer and has gorgeous yellow star-shaped flowers.

This flower gets its name from the Native American legend that says a young girl was turned into this flower after she ran away from home to elope. When her parents found her, they were so upset that they turned her into a flower.

While this legend is sad, it’s also charming. The pretty face flower is an excellent addition to any garden, and it’s sure to bring a smile to your face.

The star tulip is one of the most unique flowers on this list. It has six petals, but little hairs cover three of them. The hair-covered petals are known as sepals. All six petals are yellow, but they can range from bright yellow to deep yellow.

This star-shaped flower is native to the Sierra Nevada mountains in California and typically blooms in the spring. The star tulip is an excellent addition to any garden, and it’s sure to add a touch of uniqueness.

There are many other star-shaped flowers, including the star of Bethlehem, star jasmine, star hibiscus and starflower. I hope this article has inspired you to add some star-shaped blooms to your garden.