Depending on your point of view, weeds can add character to a garden or detract from the overall look. Whatever your personal view, though, there’s no denying that some large leaf weeds will be detrimental to your garden. Today we’ll take you through 17 common large leaf weeds that are easy to spot and identify, so you can decide if they stay or go. Ready to get started? Then let’s get to it! 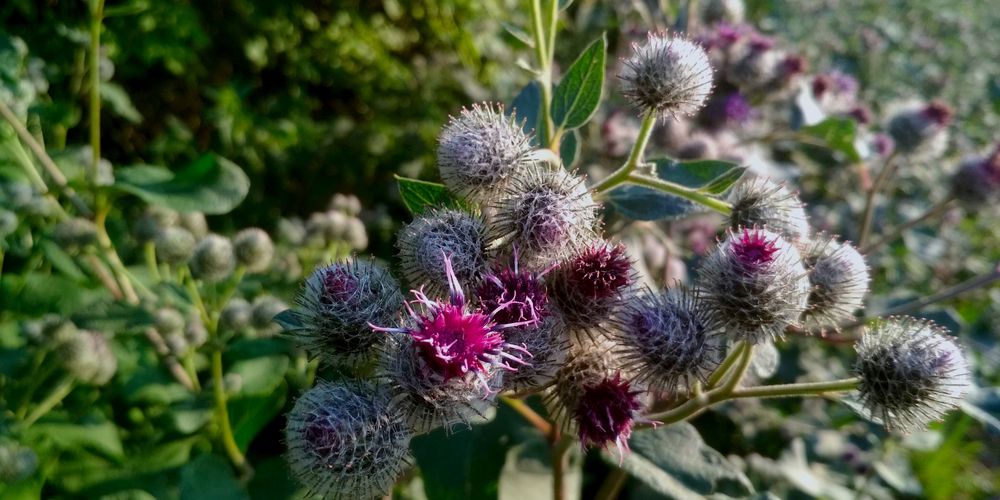 You might have already heard of common burdock or lesser burdock thanks to the infamous fizzy drink: dandelion and burdock. But these weeds are not just tasty additions to soda. They have large underground root systems which can disturb other plants nearby. During the first year, they develop leaves in a basal rosette formation that grows to between 6 and 18 inches long and 4 and 14 inches wide, so pretty big. The dark green leaves have a ‘hairy’ underside that makes spotting these weeds a breeze. Look out for purple/lavender flowers too.

This spells trouble. Japanese knotweed has roots so strong that they’re capable of interfering with your property and damaging the building. It’s that serious. Removing them is necessary, and potentially costly because this weed is so persistent and difficult to get rid of that professional intervention is needed. You can identify Japanese knotweed by its red, hollow bamboo like stems, and heart-shaped large green leaves with pointed tips. The leaves can reach 2-7 inches long, and the weed itself grows by 10cm per day, so getting rid of it is essential. 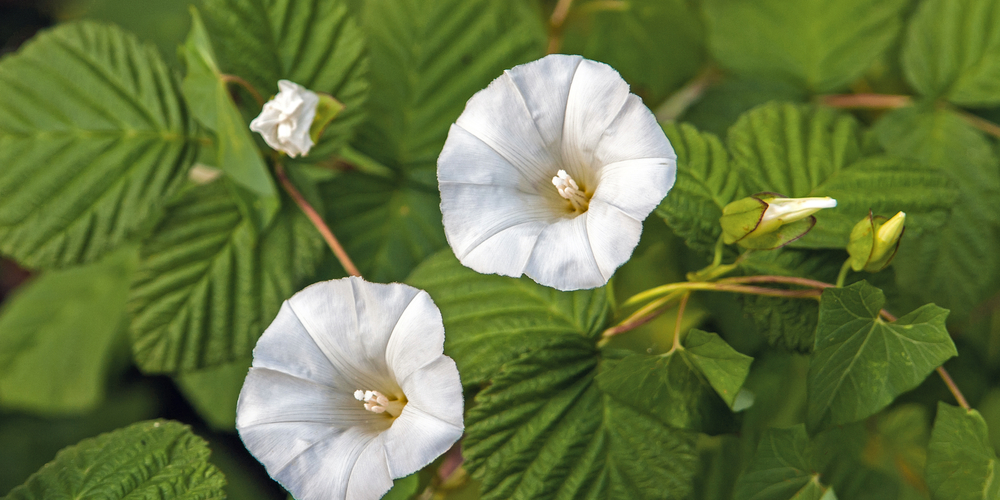 This viney weed clings to fences and walls for support and snakes along them. Spotting it is easy enough because of its distinctive arrow head shaped leaves that typically grow to around 5 inches long. When in bloom, the flowers it produces are white or pink and trumpet shaped. This is a noxious weed too, with seeds that can remain in soil for up to 30 years, meaning a thorough job must be done when trying to remove it from your property, and even then it can’t be guaranteed that it won’t come back with a vengeance…

Also known as wooly mullein or common mullein, this weed is big and can grow to 7ft tall. Its leaves are a green/gray color because they’re covered in tiny hairs, and they’re often thick and oval shaped. In terms of size, the leaves can be 4-12 inches long and 1-5 inches wide, so identifying this weed is pretty easy because of its distinctive look. 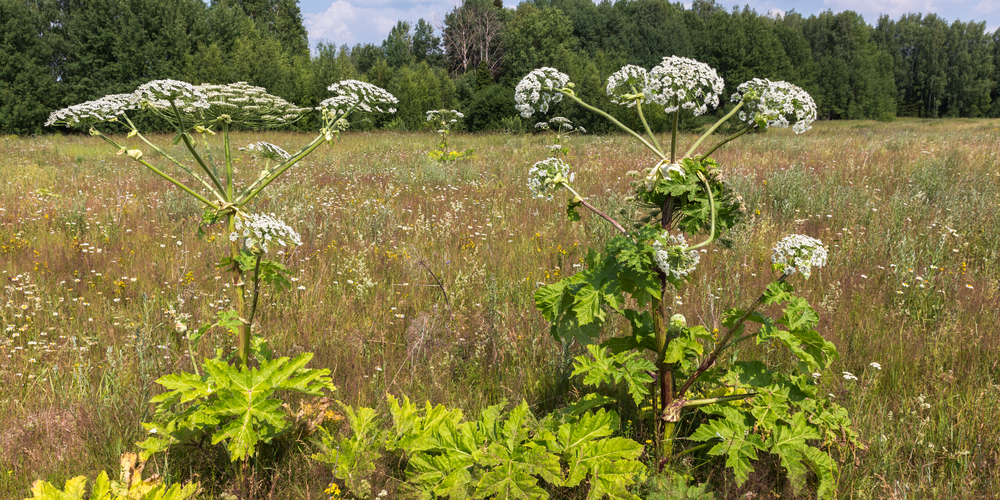 Native to North America, this weed can grow up to 6ft tall and produce leaves that are 2ft wide. The leaves are easy to identify, not just by their considerable size, but by their hairy and coarse texture. They’re also made up of 3 lobed leaflets. The weed produces a sap that’s toxic to the skin when exposed to sunlight, resulting in an itchy rash and burns/blisters. Handle cow parsnip with care and wash your hands if you touch it without gloves by mistake. From late May through June, you’ll notice a cluster of white flowers too.

One of the prettier weeds on today’s list, dame’s violet produces purple and lavender (and sometimes white) flowers from May to August. Its leaves are bright green and lance shaped, tapering to a point. They grow quite large too, to around 5 inches long and an inch across. You can also identify this weed by its leaves because both sides are hairy and tooth-edged. 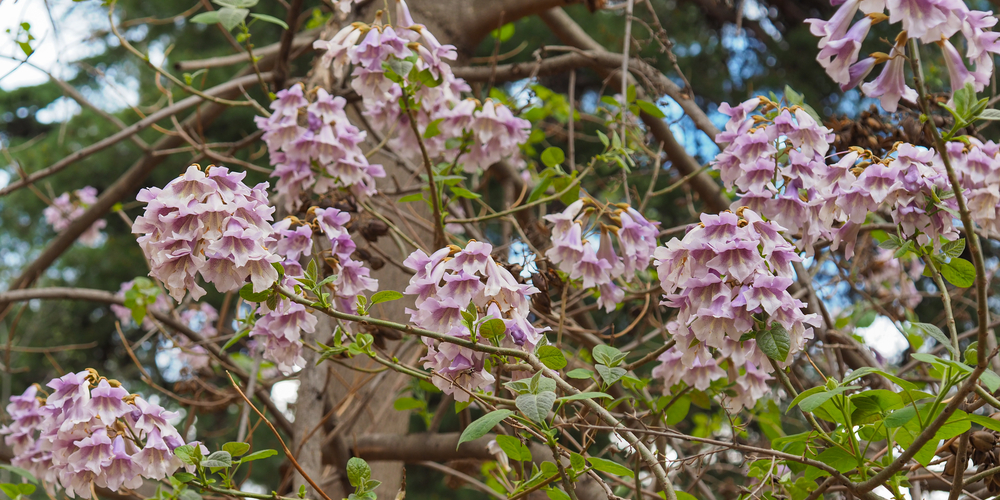 Also known as the princess tree, this weed is, of course, a weed tree. It’s fast growing, reaching 5m in one year, and reaching a maximum height of 25m. As a sapling, it simply looks like a large weed, so identifying it is important so you don’t end up like Jack’s Mom in Jack and the Beanstalk… It’s easy enough to identify though, through its large green leaves (reaching 12 inches long and 9 inches wide) and its purple leaves that resemble foxglove (another namesake of this weed). 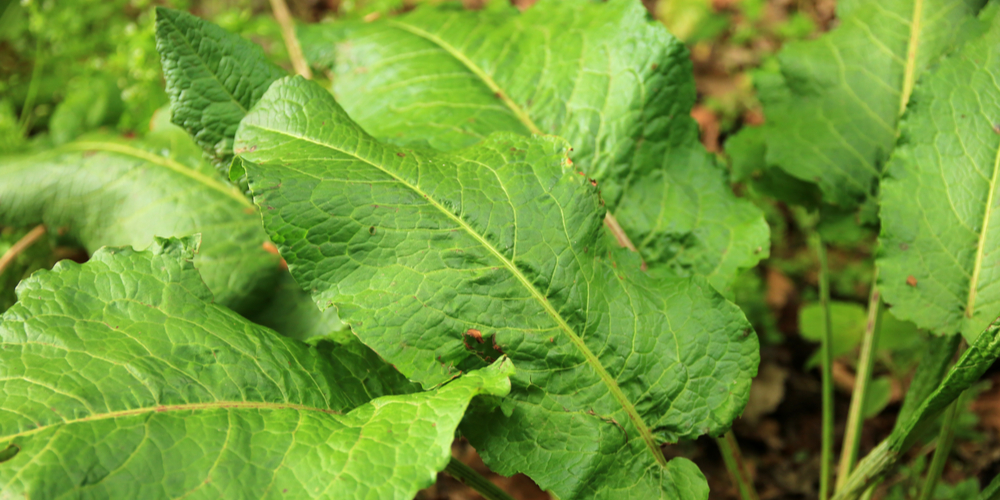 Or broad-leaved dock, this weed can grow up to 60 inches tall. As the name suggests, its leaves are broad, green, and oval shaped with rounded tips. Its leaves can also reach lengths of up to 16 inches. Just one of these weeds produces 80,000 seeds, so unless you want an entire colony of bitter dock, it’s best to remove it as soon as you see it spring up in your garden.

This is a common lawn weed that you’ll probably already have noticed throughout your gardening career. Its large leaves grow in a rosette formation and its flowers grow from the center of the weed at the stem. Leaves are oval shaped and smooth, and grow up to 20cm long. They’re nutritious to eat too, so may be worth keeping around – that’s if the 20,000 seeds it produces don’t concern you…

Giant ragweed is found in many parts of North America and will appear annually. This tall weed grows up to 12 feet high, and it has a thick green stem that makes it easy to identify. In addition, its leaves are large, growing up to 12 inches long and 8 inches wide, and they’re made up of 3-5 lobes that are oval-lance shaped. The edges of the leaf are also serrated. This noxious weed will outperform most garden plants and starve them of sunlight, so keeping giant ragweed around might not be a great idea.

This devilish weed might appear friendly at first with the red-black berries it produces, but DO NOT EAT THEM. They’re poisonous. Besides the tempting but highly dangerous berries, pokeweed can also be identified thanks to its large leaves. Reaching 15 inches long and 7 inches wide, these leaves taper at both ends and are green. Removing pokeweed is a priority if you have little ones or animals. 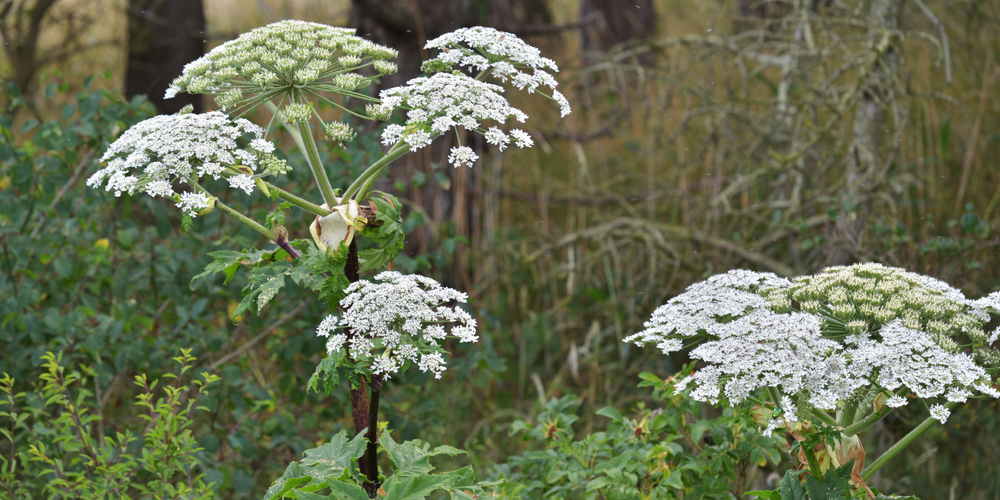 With a name like giant hogweed, it’s no surprise it’s one of the 17 large leaf weeds featured in today’s list. This one is very similar to the cow parsnip featured earlier, as it too has large leaves (5 ft wide and forming a canopy above the stem), and produces clusters of white flowers. It too has toxic sap that will cause burns and blisters when exposed to sunlight. The major difference is the height this weed reaches – upwards of 18ft sometimes. Remember, handle with care and wash your hands if you accidentally touch this weed ungloved. 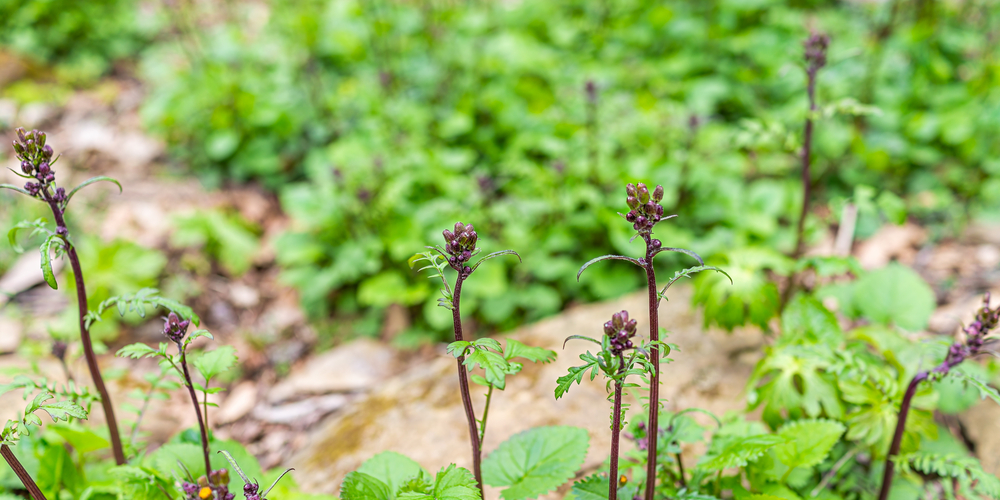 Most commonly found in shaded areas of your garden, the common figwort can grow from 5 to 10 ft tall. Its large leaves grow from square stems, creating a symmetrical pattern because they are always opposite one another. The leaves are oval shaped with lanceolate tips and toothed margins. It’s also easy to identify because of its green/purple flowers from June to September. 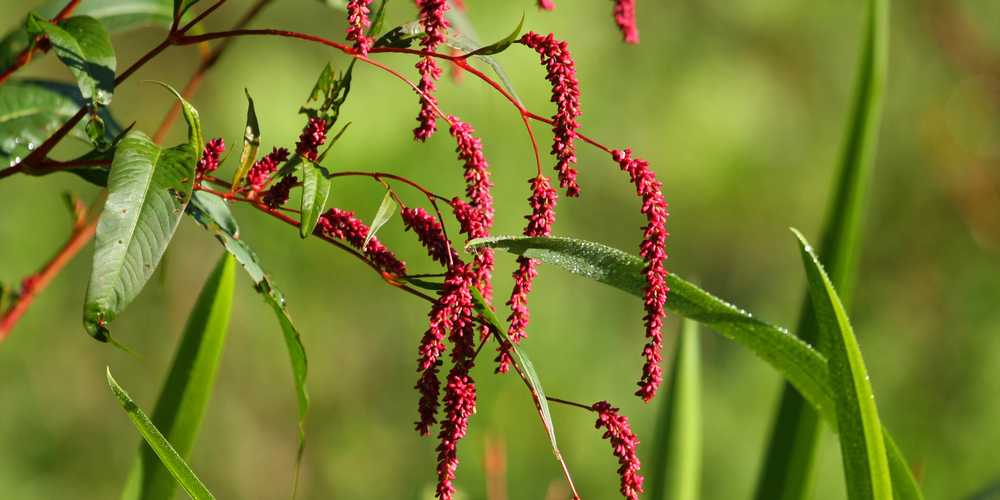 Or redshank, this weed can grow up to 1 meter tall. The leaves of lady’s thumb are long and narrow, growing up to 4 inches long and 1 inch wide. It’s a weed that’s also a wildflower considered to be an invasive species here in North America. From July to September, you can expect to see tiny pink flowers at the top of its long stems. 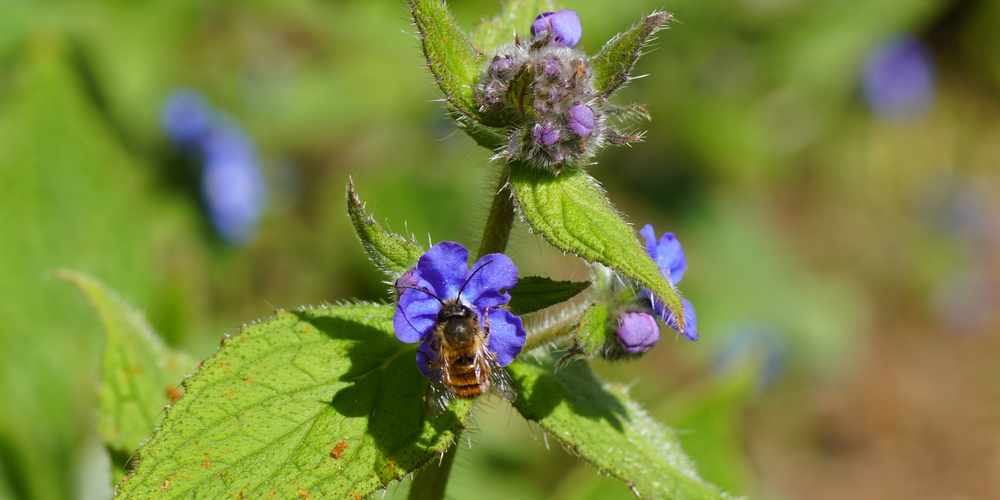 Green alkanet is easily identified by its height (it grows to 1 meter tall) and its large leaves (16 inches long). The leaves are egg shaped and are joined to the stem by long petioles. From April to June it produces forget-me-not style flowers that are beautiful. However, this weed spreads quickly in shaded areas of your garden and is tough to get rid of once rooted in place. 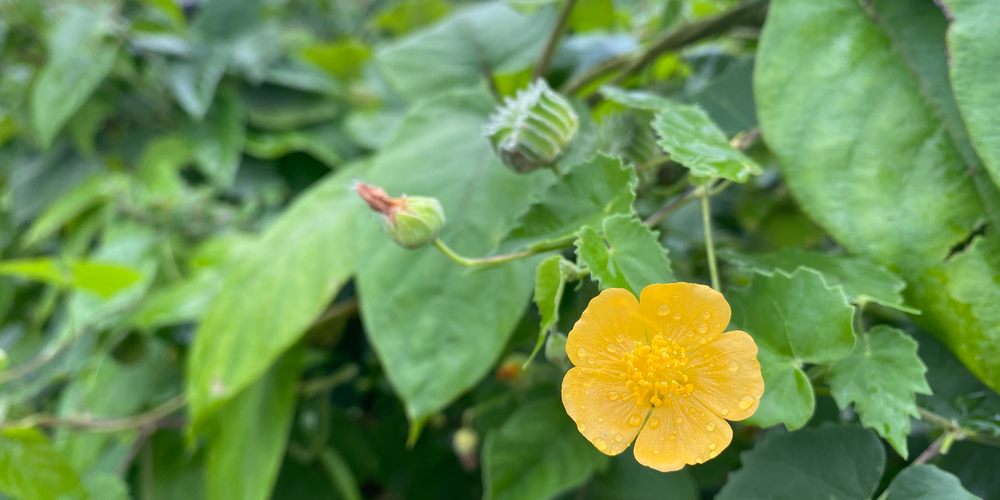 The velvetleaf gets its name from its soft, velvety leaves. Heart shaped, green, and covered in soft hairs, it’s easy to understand why this weed got its name. If near crops, you’ll want to get rid of this large leafed weed because it steels nutrients and water from the soil, and as a noxious weed, it will be detrimental to the other plants and crops surrounding it. During the summer, this weed also produces orange/yellow flowers with 5 petals, making it much easier to identify if touch alone doesn’t do it. 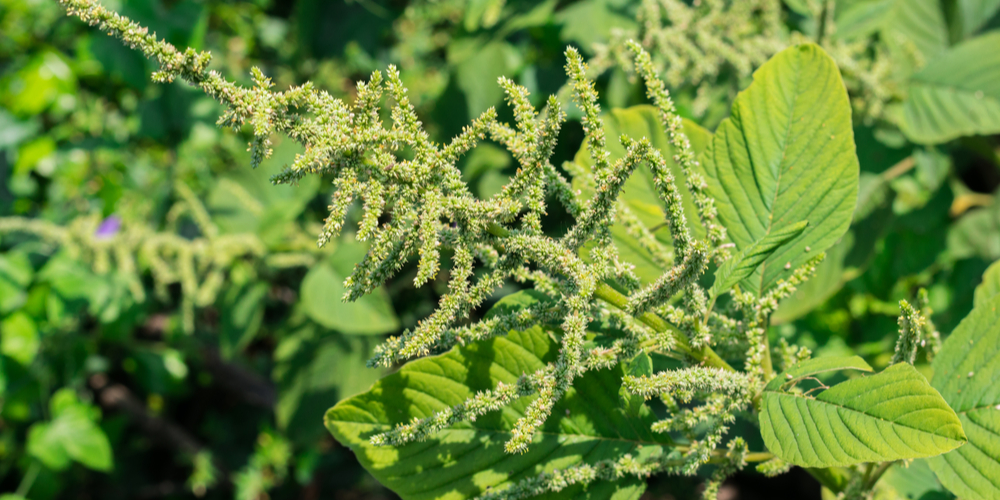 And finally, pigweed. This annual summer weed can grow to 9ft tall and has both lance shaped and oval leaves that grow up to 6 inches long. We thought we’d finish on a nice one, because this weed is actually enjoyed in many parts of the world in dishes because it’s highly nutritious. Be careful around pigs and cattle though, as pigweed, despite the name, can be fatal to them if eaten in large quantity.