Plants are some of the most abundant and beautiful things on Earth, with attractive blooms carrying aromas that provide blissful moments. However, some plants are blessed with specialized rancid smells and scents to attract nature’s less-than-romantic pollinators. Let’s look at some unusual plants that smell like skunk!

Not many people realize that there are some plants that smell like skunk. Here is a look at several plants (and flowers) with stomach-churning odors that will leave you begging for fresh air. 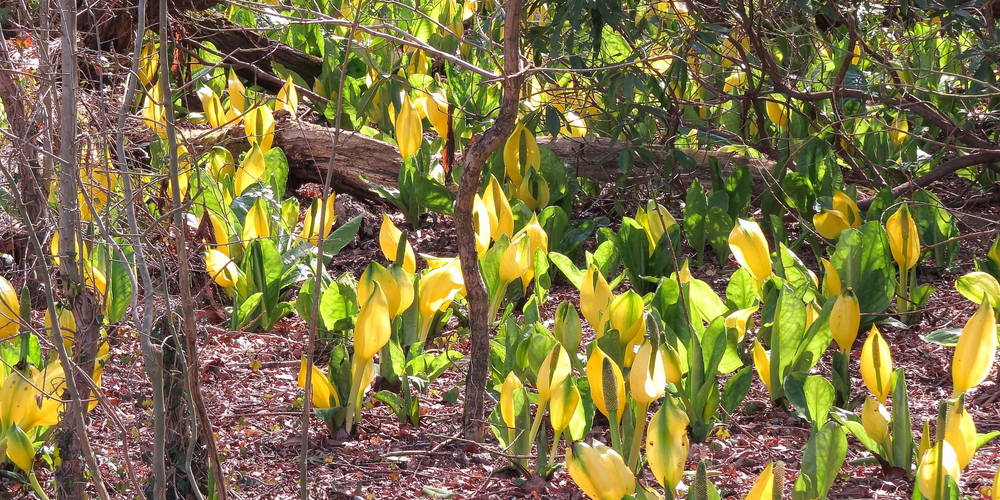 No name could be more befitting than the western skunk cabbage (scientific name Lysichiton americanum), commonly located in the Pacific Northwest. This large, perennial plant, also known as the swamp lantern, thrives in swamps and other wet environments. The western skunk cabbage grows in partial sunlight and reaches a height of five feet.

It is one of the native species in the arum family of flowering plants. The western skunk cabbage blooms yellow flowers with a horrible smell that attracts insects such as flies and beetles, which help with pollination. The smell permeates the surrounding areas, and you can detect it even in the old, dried plants.

The plant leaves develop following the flower, and when you crush them, they too carry the distinctive skunk smell. It’s worth noting that the swamp lantern is poisonous to humans and other animals when ingested. Also, the Eastern skunk cabbage bears purple flowers and the same skunk or rotten meat odor. 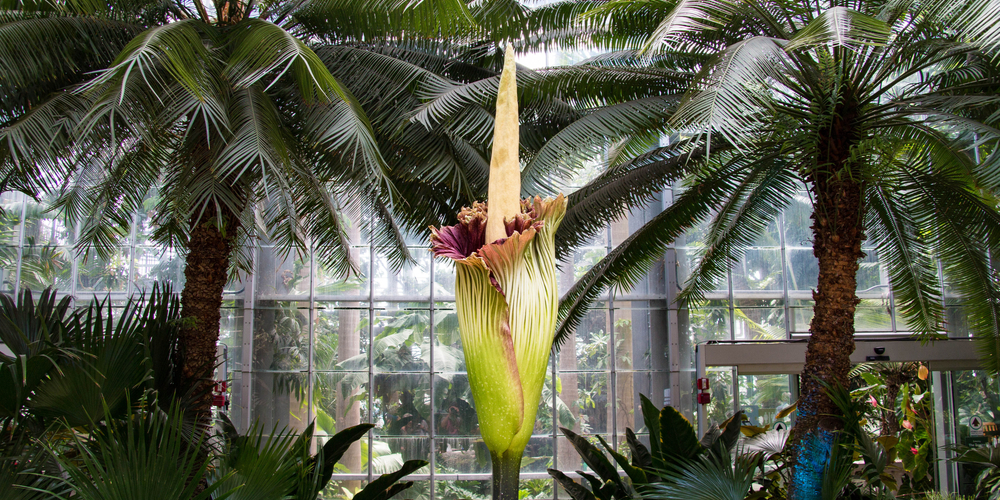 Titan arum (scientific name Amorphophallus titanium), also referred to as the corpse plant, is a flowering plant that belongs to the Araceae family. This plant is renowned for having the world’s largest unbranched inflorescence. Titan arum is endemic to Sumatra and is characterized as a carrion flower or corpse flower.

The flowers of this plant emit an odor smelling like rotting flesh, characteristic of a decaying corpse hence the name. The flowers attract scavenging beetles and flies for pollination purposes. If the skunky smell is not bad enough, the Titan arum has a mechanism where it heats up its stalk, thus enhancing the odor of decaying meat. 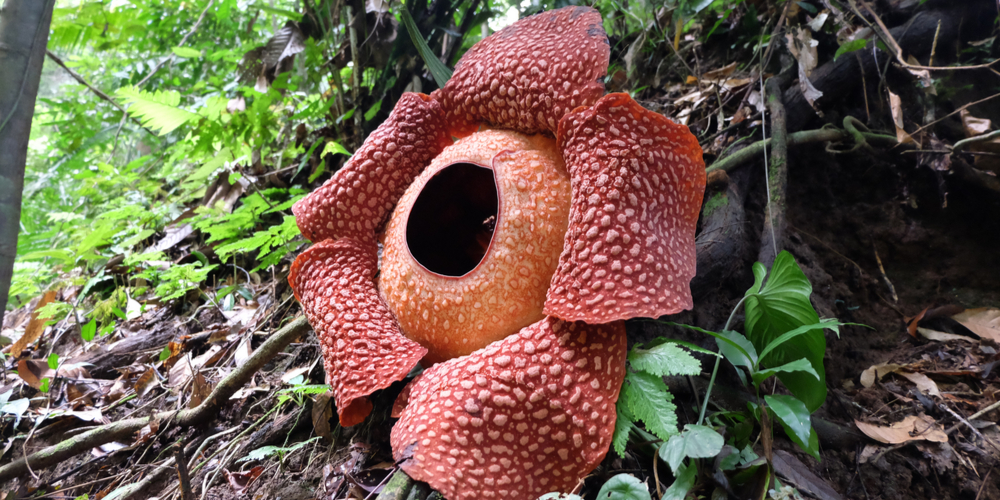 Rafflesia is a genus of flowering plants that produce a strong and unpleasant smell similar to that of decaying meat. The flowers are also called corpse or carrion flowers, and the acrid odor serves to attract scavenger beetles or carrion flies, and other insects that pollinate the plants.

These plants are rare and parasitic and located in the tropical forests of Southeast Asia (Sumatra and Borneo). The most famous of these plants is Rafflesia arnoldii, known for having the largest individual flowers on Earth. 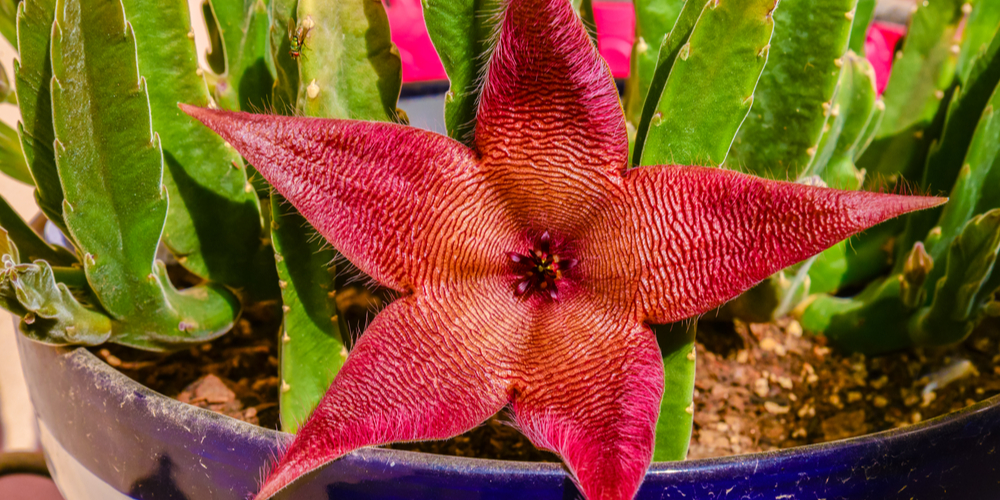 Stapelia is another genus of plants that produce corpses or carrion flowers. The plants are small succulent plants, resembling cactus and lacking a spine. Most Stapelia species are native to South Africa. The flowers of all species in this plant genus are large, star-shaped blooms reaching up to 12 inches in length.

The flowers bloom in autumn and emit a terrible pungent smell akin to rotten flesh. Just like other carrion flowers, the skunk smell attracts flies for pollination. The good news is that the plant doesn’t have a horrible smell. If you plan on potting one, you can just cut off the flowers.

The Hydnora African is a root parasite whose home is the Euphorbia Hydnora. This plant does not have any leaves and lacks chlorophyll. The entire bud is brown and appears more like fungi than a flower.

That is until it opens up and reveals an orange color on the inside. Before the bud opens, it begins to release a putrid corpse smell. The horrible carrion smells attract carrion beetles and flies that climb into the bud and facilitate pollination when they get trapped. 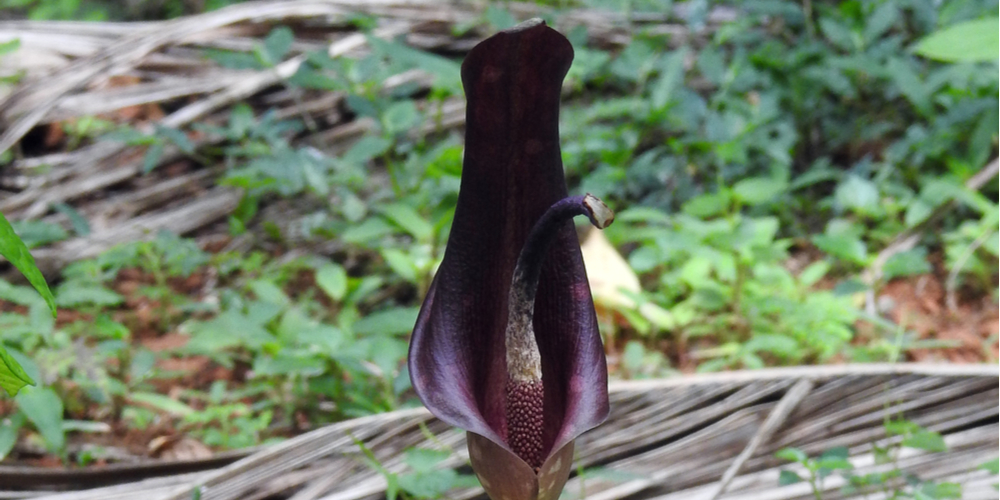 The dead horse arum lily (scientific name Helicodiceros Muscivorus) is an aptly named ornamental plant native to the northwestern Mediterranean region. The plant releases the odor of rotting meat to attract carrion blowflies that serve as pollinating agents. The dead horse arum lily is among a rare group of plants that raise their temperatures to lure insects into the plant. The temperature increases the potency of the carrion stench. 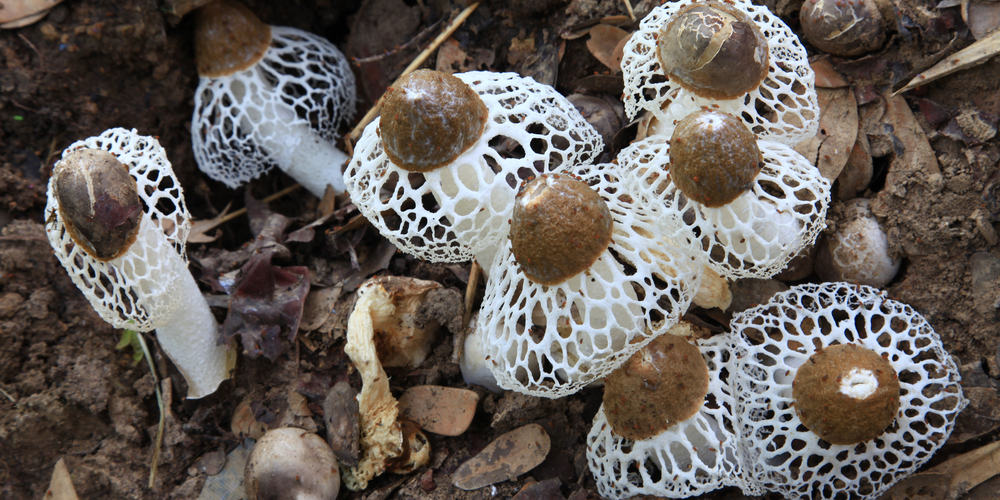 Phallaceae are a group of fungi commonly referred to as stinkhorn mushrooms. These fungi are prevalent in tropical regions, although they have a global distribution.

Phallaceae have foul-smelling spore masses. The characteristic smell is that of dung or carrion. The spore masses are borne on the end of their stalks, and the horrendous smell attracts insects to help disperse the spores.

There are other notable plants and flowers that boast of putrid repulsive smells – well, at least for us, butterflies and bees. Most plants with skunky smells attract a variety of flies and carrion beetles that help pollinate their flowers.